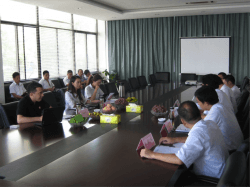 To ensure the success of a factory audit in China, as well as all over Asia there are few steps to carefully follow. One of them is the “orientation meeting”, also called “opening meeting”. It should be cautiously driven for a simple factory audit or an extensive factory audit.

Factory audit in China: how does the opening meeting start?

The lead auditor, if several auditors are participating, is the one responsible to lead the meeting and invite the relevant department heads to attend. It includes the management representative, quality manager, and top management.

When the audit is performed by a 3rd party quality control and audit company, the meeting begins by the company presentation. It is followed by an explanation about the audit purpose. Afterwards the lead auditor explains some documents linked with the audit conditions such as the anti-bribery policy (or code of conduct), and asks for the management representative signature on each one of them.

After confirming the audit conditions, the lead auditor explains the audit agenda. He lists the different sections of the audit as well as when they will be assessed. In case there are several auditors, he will also mention the person responsible for auditing each section.

Now it is time for the lead auditor to go deeper into its explanation of the standards. He should list the documents to be checked, explain the audit result grading system and report/forms used.

The cooperation during a factory audit in China (or Asia)

When an importer audits his supplier through a quality control company, the auditor should stress the need for cooperation the factory’s side. To do so, he explains that all the information about their products, manufacturing process or audit results are only disclosed to the client. He also agrees on the safety precautions to be taken during the factory tour. It includes the permission to take photos of product, warehouse, production lines, factory gate, showroom, etc.

And you: do you follow this step when performing a factory audit in China?

Source: this picture was taken during a factory audit in China, VDA 6.3, performed last week.

Habib is responsible for making sure AQF’s clients are well looked after in China. Before AQF, he held various positions responsible for Quality in the automotive industry in China and Europe. Born and raised in Morocco, Habib lived in France for 10 years and speaks French, English, Arabic and Chinese. He has a master’s degree in Mechanical Engineering and Industrial Quality from the University of Compiegne (France).